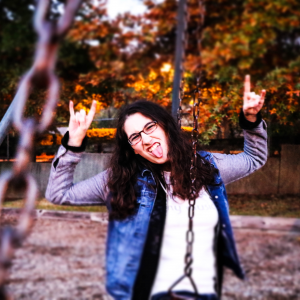 Cover of my 3-song acoustic punk single, “It’s About the Mosh,” and in general just a photo where I show just how extremely badass I really am. Taken by Shared Tokens Photography.

This is a deep, deep, deep song about posers. Okay, maybe I just like the acoustic punk sound – it’s one of the rare times one of my songs has actually sounded like something I might go out of my way to listen to! (Ha, is that bad to say about my own work? Probably!)

As with many songs I write, the seed for it was planted a long time before I actually wrote it. It began with an image that popped into my head of a 30-something man with, yes, scuffed up boots that he didn’t scuff up himself, because he got them from the thrift store and had actually never physically worked hard in his entire life. I let myself have my negative, critical daydream about this guy. He was on the NYC subway, on his way to a big protest, I think. He was dressed like a punk and paid lip service to loving punk bands (only the cool ones, of course), but didn’t listen to them when no one was watching and didn’t know the words to the songs. He constantly spoke and tweeted about politics, but he’d never actually read a single full-length political work – he only read ideological manifestos and persuasive pamphlets and regurgitated the talking points back.

He made me think of all the fake, holier-than-thou posers I’ve ever met at punk shows or had online arguments with. And eventually I daydreamed about him so much that I had enough material for a whole song! The light bulb moment when I knew I was ready to write it (I love those moments!) was when I thought of the line, “What did you mean when you said that you wanted to be free?” It tied the entire song together. Freedom is a common political ideal that punk types (and others) of many different persuasions like to toss around, but what does it really mean to them? If you let the scene make your decisions for you and you feel obligated to say and do things you don’t really mean in order to score points or just to fit in, are you really free at that point?

The best-loved quote of the album (according to a highly scientific poll of 10 people on Facebook) comes toward the end of the song: “For the love of all that’s good in the world… start something.” (I actually put that on the back of my T-shirts to give the people what they wanted!) And after that line, I may have fancied myself the hero just a little bit. After all, I wear basic, uncool clothing and I scuff up my sneakers myself, so I’m obviously exponentially better than scuffed-up-boots poser man.

My favorite aspect of this song is that, to me, I did a good job of painting a vivid picture of precisely the man I wanted to portray. My hope is that you, too, can close your eyes and see him sitting there on the subway with his scuffed up boots, denim jacket, and smug face, looking all punk and intelligent, but you’re in on the secret that it’s all for show.

[Fun fact, especially for anyone who’s been paying attention since the beginning of my journey (thanks, by the way!): I consider this to be a 1000000x improved reworking of another song I attempted to write on a similar topic during my Throwaway Song of the Week project, which I will NEVER name or share because it’s crap and you don’t need to hear it; you’ve got this one now. Just trust me on that. But I’d be happy to give a prize if anyone can tell me the name of that song!]

He wears scuffed up boots of the most honorable kind
And yeah, boots may lack the memory of the lives they leave behind
But how can you just pick up where someone else leaves off?
For the love of all that’s good in the world… start something