Hello, friends! Now that my album release month is winding down to a close, I decided to do a few showcase/explanation blogs of some of my favorite songs off the album that haven’t been listened to as much as I think they deserve. 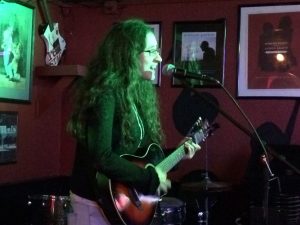 Jiggs open mic, Butler NJ, 2017. The place where a middle-aged woman identified with the “old lady at the open mic” from my song, and where I may end up as one someday.

This first one, “The Old Lady at the Open Mic,” is a very simple and transparent song, which many of the people who cared to listen to it have actually liked. I’ve been told that the tune is one of my more interesting, and I’ve had one woman at an open mic strongly identify with the main character! She was quite a bit younger than the image I had in mind, though, which is super old.

I chose this as one of the underrated songs because with today’s short attention spans, most people have not made it to this final track.

The basic idea is a story about being at an open mic and watching an extremely talented old lady crush it. I’m not going to say how much of the story is real vs. imagined because I don’t want to ruin it!

Of course, the ponderings that it leads to are 100% real. She makes me wonder why she never succeeded despite being talented and working at it for so many decades, and consider what it would mean to me to have the same outcome — which probably has as much to do with chance as anything else. I really did have a bit of an existential crisis, and spent some time coming to terms with the idea that I could be the old lady at the open mic someday. I tried to imagine what I would do if it happened, really. This had nothing to do with writing a song; that came much later when I realized what a good topic it was.

**SPOILER ALERT! Listen to the song first, if you were planning to (and I appreciate it)! Spoiler below the Spotify and YouTube links.**

I honestly decided that not only would I not give up, but I would own my status as the old lady at the open mic! Because honestly, how cool is a talented old lady who’s been working the open mic circuit for 40+ years? It’s sad, yes, but it’s cool and badass that she’s still up there doing what she loves and chasing her dreams, and more power to her! Right?!

And then I realized, whoa, that would actually be a great opportunity for a last-ditch effort to achieve my dreams! I would be unique and impressive and it would be easy to get people on my side, indeed, much easier than it is now when I’m just one in a million equally hungry 20-somethings with the same potential. At that point I could write and vlog about my story all over the internet. It might even go viral, and then I could start a crowdfunding campaign for the tour of my dreams. In fact, it would be my dream actually come true because my music will have finally achieved the exposure I always wanted! As the fitting last line goes: “Let’s call it plan B.”

I’m watching the old lady at the open mic
Look at her go
She’s amazing, am I afraid that could be me?

Well, forty years of a day job you hate
In an office where they gather round the cooler and nobody gets you
Just to come here every night and stay up late
Sing your ten thousandth song and wonder when you will have paid your dues
Her songs were fine, but the stars never aligned

I’m watching the old lady at the open mic
Look at her go
She’s amazing, am I afraid that could be me?

Well, if that were me, I could say I wouldn’t give up just yet
No, I would blog, vlog, and live stream for all the views I could get
I’d crowd fund this old lady’s last hope to reach her dream
And I’d go viral and everyone in the world would know my name
Because who could resist contributing to that cause?
People round the world who want to hear me sing my songs
What a dream!

I’m watching the old lady at the open mic
Look at her go
She’s amazing, am I afraid that could be me?
I’d have to say no… let’s call it plan B.