I just realized my blog was looking pretty outdated since I hadn’t updated it since the beginning of quarantine. Some people might not have done much in the past month and a half, but I’ve done quite a bit!

On a personal level I’ve been staying physically and mentally healthy lately, though I definitely had a bit of a breakdown at the beginning. I make sure to work out almost every day, eat healthyish, sleep for kind of eight hours, etc. I hope everyone reading this is doing okay too!

The first important piece of news is 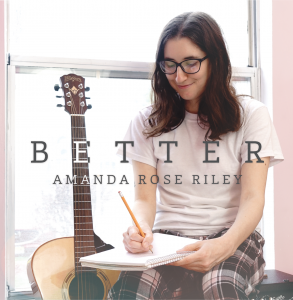 my new album, Better, coming out next Friday (May 8th)! I wrote most of the songs in February for the February Album Writing Month challenge (FAWM) in the hopes of releasing on this date, and I was lucky enough that I got my studio time in just under the wire during the first week of March. I even have the CDs and stickers that I wanted, as I was able to find manufacturers that were still making them!

I’ve done a bit of a staggered album release. Anyone who pre-ordered the album got the download a week early (which means at this stage it’s an instant download upon ordering). But the date it will go live on streaming sites is still May 8th. The best place to purchase a download or CD is my store, and if you’re interested in pre-saving on Spotify, Deezer, or Apple Music you can do that here. Thank you so much to everyone who has already pre-ordered and pre-saved. It means a lot to me to see that, especially at a time like this.

You can currently listen to the first two tracks of my album, “Better” and “Make It Right,” on YouTube. I will also paste them at the bottom of the blog for your convenience. 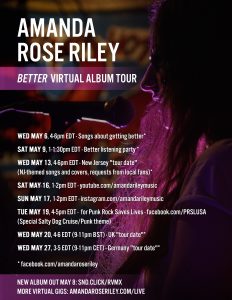 The second most important piece of news is my first virtual album tour! Let’s hope it’s not the first of many, but if that’s what I have to do, then I will do it. But for the time being, it’s a way to switch things up to keep myself interested and having fun through the many live streams I’m doing. And hopefully it will keep things interesting for those who decide to come along for the ride, too!

You can see my basic plan at the flyer I’ve added here, but the most comprehensive and up-to-date list will be at my live shows page. I continue to find and add amazing virtual open mics and festivals regularly (I love how well the music community has come together to create all of this).

Some notable parts of the tour:

I have already been doing a weekly Facebook Live stream (Wednesdays from ~4-6 pm EDT) since the beginning of the quarantine, and the response to those has been amazing! I will continue to do those after the “tour” is over. I’m so grateful to everyone who’s chosen to spend time listening to my songs and covers instead of watching Netflix or competing shows. Doing those every week keeps me sane, and it’s so nice to hear that it’s giving other people something to look forward to as well.