For the third album in a row, I’ve decided to showcase each track in a “behind the song” blog series. I hope some listeners find it interesting or helpful. “The Bench at the Top of the World” is the first track from my latest release, The Fine Print. For convenience, the lyrics and YouTube & Spotify streams are at the bottom of this post.

Of all the songs on my new album, I definitely think I’ve had the longest and most serious relationship with this one. It wasn’t actually the first one I wrote in the batch (though all were written in the same three-month span), but it was the first one I fell in love with and began playing in my weekly Facebook Live streams. I liked it so much that I played it nearly every week, and when I didn’t it was often requested.

It evolved over time, and yet this was one of only two songs that I kept acoustic (the other being the last track, “I’ll Bring My Voice”). But of those two, the other is very delicate and begs to be acoustic, whereas this one has a more acoustic punk feel. I honestly could have seen it going either way because I felt that it was catchy enough to stand on its own, but the style was also suitable for a fuller arrangement. I saved it for last for that reason, and in the end, time made the decision for me. I was exhausted from arranging all the other songs and I felt it was better to keep the arrangment bare than to do a bad job with it. 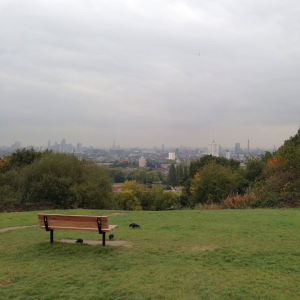 The song came about for a few reasons. First, I was missing London, my happy place — in particular my favorite bench on Parliament Hill, Hampstead Heath (which was correctly and precisely identified in a photo by one of my fans from London on Facebook). Full disclosure: this is not my actual favorite bench, but this bench happened to be more photogenic than my actual favorite.

London is my favorite place in the world. As weird as it is to be in love with a city, I’m in love with it. From the first moment I set foot there, I’ve just always felt weirdly at peace and at home there. I was fortunate to go once a twice or year for several years in a row, but at this point I haven’t been there since December 2018! And two and a half years is a long time to be away from the one you love, so I was feeling a little sad, which is the perfect reason to write a song.

Ironically, it’s always hardest for me to finish songs that mean a lot to me because I’m afraid I won’t do justice to the emotions I’m trying to convey. So partly to motivate myself, I ended up trying to get a songwriting challenge going in one of many musician groups I’m a part of. I said we should all write a song about our favorite place in the world. Unfortunately, nobody else cared about my challenge and I don’t think a single person took me up on it. But on the bright side, evidently I was able to motivate myself to finish this song!

Musically, I think I was listening to Xtra Mile artists (my favorite record label) a lot. In this case, I don’t feel like I was particularly channeling Frank Turner (my favorite songwriter, in case you’ve been living under a rock), but other songwriters like Dan Allen of Ducking Punches. I’ve always liked his style, and I felt like this was the one time I was kind of channeling it.

If you haven’t already, I highly recommend checking out this song in the Spotify mobile app, which as far as I know is the only place where you can see Canvas art (3-8 second videos that loop while you’re listening to a song). My favorite graphic designer, Matthew J. Corrales (I highly recommend him for all your design and animation needs), has been working on some Canvases for my songs, and this is the first one he completed. He used my bench photo and created some sky animation with clouds and the day passing to night. I thought it was very cool!

Even if some might say it’s too much work
Or they’d simply pass it by and they’d take no notice
I’m in it for the long haul, even if it hurts
Meet me on the bench at the top of the world

Even if some might say it costs too much
Or that they can’t stand all the oppressive crowding
For me I can always see the beauty, it’s got that touch
Meet me on the bench at the top of the world