Musically, I wasn’t sure if I wanted it to be first because it’s far from the strongest track. It’s fully acoustic and it doesn’t have a catchy hook like some of the others. You really want to put your strongest, catchiest tracks first to avoid people writing off the whole album because they didn’t like the first song. In the end, of course, I decided to take the risk because the story was more important to me. And indeed, judging by metrics, it does look like many people dropped off after hearing this song and not particularly enjoying the music. If that describes you, then I sincerely hope you’ll give the story and lyrics a chance to win you over (and then check out the rest of the album)! 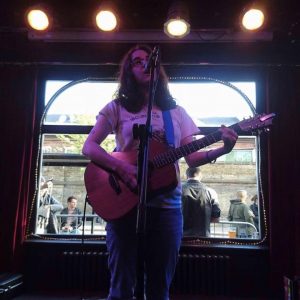 A nervous-looking G chord during the warm-up to Frank Turner’s Lost Evenings Festival last year, at the Camden Monarch. Definitely one of the coolest gigs I’ve ever played. Photo by my English counterpart, Liz.

I think what I really hope this song does is paint a picture of a moment in time for me, of what it’s like to be a musician at my level, who goes out on adventures doing what I love, with no idea of the ultimate outcome, and just hopes it all works out. I’m not sure how it’s perceived by those who have never done it. Do you think these adventures are glamorous/all fun and games? Or perhaps at the other extreme, do you think it’s not that much fun at all and is merely a means to an end, since I’m not making money yet nor achieving the results, recognition, and success that I dream of? Well, it’s not really either one!

It’s certainly not glamorous or always pleasant, for all the reasons I just mentioned. But it also can’t simply be described as an unpleasant, painful, forward-looking existence. Yes. I hope that someday I’ll make more than $20 at a time and live off of this. Yes. I hope that someday my idols will be my peers and I’ll have a team behind me that I genuinely admire and I won’t have to beg a new person every week just to be given a shot. Yes. I hope that someday large swathes of people will love (not just like!) my music, be inspired by it, and constantly look forward to the next thing I do.

But failing all of this, this won’t have all been a waste of time. I don’t take it for granted how lucky I am that I was very, very young when I settled upon that one thing that sets me on fire with absolute certainty. Some people spend a lifetime trying to find that thing, and never do. And not only have I known mine for as long as I can remember, but at this moment in my life, I’m actually fortunate to have enough time, resources, energy, and freedom to give it a fair shot. And most importantly: I say I want to inspire people and build something that will draw people to it? Well, I already am.

It’s not a lot of people who really, truly care about it yet. It’s one, two, maybe three dozen and counting. But even if it stops growing there, and that’s the biggest number I ever reach, I still achieved the part of the goal that I wanted the most, hands down – much more than the income and the industry approval – and it was worth it. That’s why the last line works so perfectly for me, even if other people are going to find it cheesy: “I’m already rich because I have everything I’ve ever wanted.”

Someday I’m going to earn more than I spent on the train just to get there
Someday they won’t just come to see me, they’ll be happy to play
Someday important people will answer my emails, because they want to
Or maybe important emails my important people sent their way

Because I’m just doing this because I have to know, or at least I have to try:
What does it feel like to be on the other side?
Because every one of my best days has been when people gathered round for a song
How does it feel to be the one who brought the whole thing on?

But then I’m already making those moments
For free and imperfectly, that is to say untarnished
And I’m already rich because I have everything I’ve ever wanted.