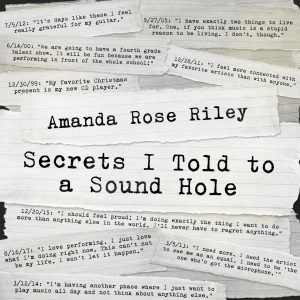 Secrets I Told to a Sound Hole is my debut studio album, on the theme of music and my journey with it. The best place to purchase (digital, physical, or merch) is my store. You can also stream at Spotify, YouTube or Soundcloud (below) or purchase on Bandcamp, iTunes, Amazon, or another digital retailer you like.

Check out my blogs telling my stories and explanations for my top “underrated” songs from the album:
4) “The Old Lady at the Open Mic”
3) “A Song That’s Not in G”
2) “Scuffed Up Boots”
1) “Secrets I Told to a Sound Hole”

Someday I’m gonna earn more than I spent on the train, just to get there
Someday they won’t just come to see me, they’ll be happy to pay
Someday important people will answer my emails, because they want to
Or maybe important emails my important people sent their way

Because I’m just doing this because I have to know, or at least I have to try
What does it feel like to be on the other side?
Because every one of my best days has been when people gathered ‘round for a song
How does it feel to be the one who brought the whole thing on?
But then I’m already making those moments
For free and imperfectly, that is to say untarnished
And I’m already rich because I have everything I’ve ever wanted.

2. SHARING A STAGE
I’m stepping onto a stage
Small and uncomfortable, dirty and imperfect
But everything’s okay
Because somewhere beneath years of polish are your footprints
And you’ve left an energy that I can tap into
I can achieve all you do if I want to

I put my pen to the page
The feelings don’t match the sounds, amateur that I am, but still
I know they will someday
Because you’re living proof it gets easier with practice
And you can turn terrible things into great songs
You remind me it’s not something I should give up on

And just like you told me, I shall underwhelm
With the most awkward eye contact and smallest of crowds
But the way that I got bold enough to think that I could do this
Was I recognized in you an unmatched conscientiousness
And found it inside of myself
Just like you must have first seen it in somebody else
And I’m one level higher with every step I take
Up the many stairs to your now much bigger stage

If you could catch a glimpse of just how I feel about music
You would say that it was sick, and perhaps it is
Because when the music brings that hollow pang, that’s when I know I’m all right
Try to understand, but how could you understand?
It’s not just shitty job savings that I can’t help but invest
It’s my blood and my body and my very will to live
I’m taking bets on myself and keeping all of the risk
Because I know the well-trodden one’s a fruitful path
But all that I can see is hopeless, empty black

I used to ask myself when I was young,
Do you really think you’d be one of the lucky ones?
Is this a means to being cool, or is it true love?
But it made no sense to question
Because music was my only definition of cool, whether a dorky music teacher or a rock star
Try to understand, but how could you understand?
I want to talk shop with my heroes, I don’t care about their clout
As long as they know what I’m talking about
I’m just looking for the people who can make a worthy sound
Because if this guitar could serve my every human need
Then it would be the sole companion that I would ever seek

4. PINS AND NEEDLES
My feet were made to take me places, to wander the earth’s circumference
Where I could win friends, I could achieve greatness
Just getting out there makes the difference
And I could be cutting my teeth at the open mics in all the big cities I could dream
But instead I’m slaving over a post with five likes and songs no one hears but my family
And I sit here so long on top of my feet
Stopping the blood from circulating
That I get pins and needles, and I’ve gotta get up and go

And I don’t blame myself for the fear of leaping right into something new
Inside the comfort zone things are clearer
And stepping out is terrifying to do
But though I know it’ll be painful and strange to step directly on that sleepy foot
Isn’t this the whole reason I even came, to take this road as far as I could?
And deep down I know if I’m not using these feet
That I’ll be sorry because they’ll go to sleep forever
So I feel my pins and needles saying I’ve gotta get up and go.

But I made it out this far, I’ve always faced it all
I found my way through some trying days, and all I want is more

Because give me one clear shot:
Make it and win, or miss and lose big
And I’ll blow it off to binge watch shows so bad they make me cringe
Better to get me on a train with a notebook and no phone
En route to somewhere where I can sing this song all night
And I’ll effortlessly find and clear the hurdles in my mind

7. SCUFFED UP BOOTS
He wears scuffed up boots of a most honorable kind
But he found them that way at the thrift store
He speaks fresh insights as if they came from his own mind
But they came from manifesto pamphlets on his floor

And to go with his boots he’s got some shiny doctrines
Always retweeting quotes from 19th century authors
When you see him you think that he must read a lot of books
When you see him you think he must do so much good
But he never seems to show up when he’s called on for support by his friends
And he only shares his views in rooms where everybody agrees with him
But man, what did you mean when you said that you wanted to be free?

He wears scuffed up boots of a most honorable kind
And yeah boots may lack the memory of the lives they leave behind
But how can you just pick up where someone else leaves off?
For the love of all that’s good in the world… start something
Because the world doesn’t need another hero
Who thinks he can buy the appearance of merit
It needs someone sporting sneakers that she scuffed up herself
And a wardrobe consisting of jeans and a T-shirt
Because I think what’s cool is being relentlessly you
And I think what’s punk is letting yourself be the judge
And I think that free means having no one to please but yourself
What did you mean?
If you want to be free…

8. GUITAR CRUCIFIXION
I wrote these words when I was young
Closed up the notebook, put it in a closet
Let it sit for years collecting dust
Internalized the negative, there’s no point in trying this
Dedicate your life to something sure
If no one ever cares, then this is too much work

A voice can make the world a better place
I know because I have listened, God how I’ve listened
Drawn to that green and purple stage
Singing alone in my bed, I’m sweating and I’m out of breath
That’s a good sign that I should care
And if I died trying, that’d be a crown I’d proudly wear

I don’t care what you say, I’ll make it on my own
It’s my turn now, you’ve had your day
And I’m as strong as stone

9. MUSIC IS ENOUGH
If you look hard enough
There’s someone who wants to see you fail
They’re gonna spread hatred, try to burn all your bridges
Discourage and shake you, cut you down till they break you
But if you look hard enough
Someone wants to pick you up where you fell off
They’re gonna shower you with love, tell the world that you’re too good
Build you up till you’re strong, build a stage you can sing on
So I can handle this
It’s just a small rejection
A small sliver of flesh nicked off my back with a dirty old knife
And I can live without it

I’m watching the old lady at the open mic
She’s amazing; am I afraid that could be me?

Well, 40 years of a day job you hate
In an office where they gather round the cooler and nobody gets you
Just to come here every night and stay up late
Sing your 10,000th song and wonder when you will have paid your dues
Her songs are fine but the stars never aligned

Well, if that were me I could say I wouldn’t give up just yet
No, I would blog, vlog and live stream for all the views I could get
I’d crowd fund this old lady’s last hope to reach her dream
And I’d go viral and everyone in the world would know my name
Because who could resist contributing to that cause?
People round the world who want to hear me sing my songs… what a dream

I’m watching the old lady at the open mic
She’s amazing; am I afraid that could be me?
I’d have to say no; let’s call it plan B.